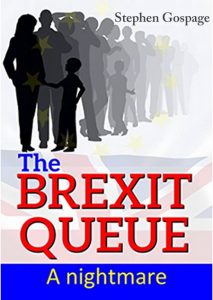 ‘Brexit’ is upon us and the United Kingdom is leaving the European Union. Many consider this to be a tragic mistake, brought about by a crude and dishonest referendum campaign. The UK’s relationship with its European friends and neighbours will inevitably undergo a fundamental change. There is a serious risk that the UK, once cut adrift from civilized European values, could become a mean-spirited, unwelcoming country which chooses to embrace selfish and backward policies, including some of those originating from across the Atlantic. The ‘Brexit Queue’ is a poetic representation of Britain’s departure from the European Union, and its possible consequences, as a dream. It is not a prediction. It is not a forecast. It is simply one version of what the future may hold, expressed through the medium of fantasy. Of course, fantasy may, and often does, become reality. And a dream can quickly turn into a nightmare.